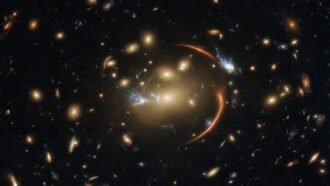 Then, at the end of the 1920s, the cosmos disclosed its most closely held secret of all: It was getting bigger. Rather than static and stable, an everlasting and ever-the-same entity encompassing all of reality, the universe continually expanded. Observations of distant galaxies showed them flying apart from each other, suggesting the current cosmos to be just the adult phase of a universe born long ago in the burst of a tiny blotch of energy.