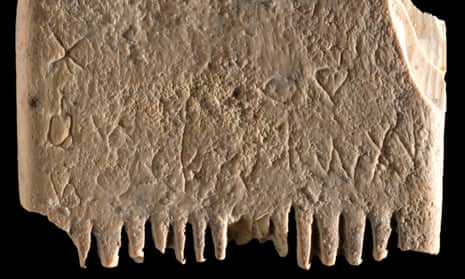 It’s a simple sentence that captures the hopes and fears of modern-day parents as much as the bronze age Canaanite who owned the doubled-edged ivory comb on which the words appear.Believed to be the oldest known sentence written in the earliest alphabet, the inscription on the luxury item reads: “May this tusk root out the lice of the hair and the beard.”Unearthed in Lachish, a Canaanite city state in the second millennium BCE and the second most important city in the kingdom of Judah, the comb suggests that humans have endured lice for thousands of years and that even the wealthiest were not spared the grim infestations.“The inscription is very human,” said Prof Yosef Garfinkel, an archaeologist at the Hebrew University of Jerusalem, who helped direct the Lachish excavations. “You have a comb and on the comb you have a wish to destroy lice on the hair and beard. Nowadays we have all these sprays and modern medicines and poisons. In the past they didn’t have those.”