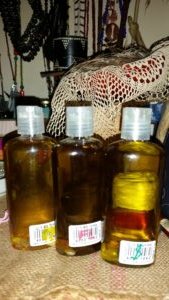 These are my reviews of a couple of my favorite brands of perfume oils, Al Rehab and Lady’s Essentials.

Body Musk is a very clean, crisp but soft scent.  It is somewhat reminiscent of a white musk, but a bit more happy and less sharp.

It’s marketed to women, but it actually smells better on men.  Be careful though, because women smell this very strongly, but men do not.  So it’s easy for a guy to overdo it.  A small streak at the sternum and pulse points is all you need, and it’ll last all day or night.

Full is natural extremely extremely jasmine.  It’s like burying your face in a handfull of the tiny blossoms on a warm spring night in the middle east.

It is a very feminine scent, and very flowery, and yet not overbearing or headache inducing.  From the bottle it smells very powerful, but it mellows very nicely on the skin.

Golden is described as a very young scent.  In my opinion, this is an understatement.  It reminds me very much of a teenage version of the sort of perfumes that are sold with glamour dolls.  It is powdery, and flowery, with a barely detectable touch of woodiness.

It will bring back the memories, and is great for the young or the young at heart.  It’s a good introduction to perfume oils for young girls who want to smell pretty, but not too sexy.

Mokhalat Al-oud is a very clean and simple woody scent.  It’s great when you want something deep but not too overdone.  The smell is mature and straightforward, not too old.  It goes very well with businesswear.

This is everything you wanted a rose perfume to be, but were unable to find until Al Rehab got it just right.  It’s somewhere between garden, Damask, and tea rose, just the right balance.  It doesn’t smell anything like the synthetics people are used to.  This is the real deal.

This is definitely an oil to wear if you want to be remembered.  Men will want to be near you just to inhale your aura.  Handle this one with care.

Shaikhah is a scent that not just anybody can wear.  It’s just the right blend of flower and wood for the highly confident woman.  You must have the kind of body odor that is pleasant even when it is strong.  If you already have an attractive natural smell, then Shaikhah will be the perfect compliment to it.

Oils from Lady’s Essentials are made for the real fragrance lover, aromatherapist, or magick practitioner.  They properly make the distinctions between a fragrance blend, a fragrance oil, an essential oil, and a resin oil.  For this reason, they are one of the top scent suppliers in Ebay, and are often a supplier for other scent specialists.

They have just about everything.  What they don’t have, you can request.

I have bought the following oils from them, and was initially very pleased.  I could smell that they were freshly mixed, and closed them so that they could age and blossom.  Months later, I went from very pleased to EXTREMELY pleased by what I smelled.  They’re beautiful and strong, and I still haven’t used all of the few vials that I bought.

This was the subject of some controversy when people who hadn’t smelled the real thing before, were confused when they openned their vials.  I can personally attest though, that it smells like the real thing even on the skin after some hours.  It also causes the normal reactions.

What you get when you buy the oil is an oil-ambergris solution of consistent but unknown concentration.  There’s no way to tell exactly how much ambergris to base oil there is, but it is strong enough that if you open the one dram vial, you’ll be smelling it in the air for awhile.  There’s no alcohol in the mix, so the cloud of scent is just coming from the amount of ambergris that’s in it.  It’s some good stuff.

So far, I’ve used it to make a few 50ml pots of lotion, a solid perfume, and an apathy curing aromatherapy mix.  All clients were very satisfied.

Have you ever smelled a guy who you just had to be close to just to breathe the air around him?  Maybe he was wearing African Musk.  Different companies have different blends, but Lady’s Essentials got this one on lock.  It’s musky but it doesn’t hit you over the head with it.  It has that sort of “ibex” tone that Egyptian musk has, but it’s not as tangy.  It has an almost floweriness to it.

When a woman wears it, it will make her feel very sexy, and when a man wears it, he smells very attractive.  This is a must-have for anyone’s scent collection.  Use it alone or as a booster for other musk compatible smells.

Lady’s blend of China Rain is unique.  It is as pretty as the one most folks are used to, but it totally lacks the burn in the back of the nose.  It is very fresh, and very clean smelling.  It’s more like a rainy day in spring than in fall…sweet, but not dank.  I find it very relaxing.

My signature scent is a combination of Opium and Egyptian Musk, so I buy them regularly.  I was and am still very pleased with Lady’s version of Opium.  It’s actually an improvement on the YSL one, in my opinion, because the ingredients haven’t been killed by alcohol.  If you wear Opium, then this is a good layer to add to your regime.

Another scent that smells totally different and exponentially better when it hasn’t been mutilated by alcohol, Lady’s White Musk is just fabulous.  It’s subtle in the bottle, but very strong on the skin, so take care to dilute it into some lotion or use sparingly.

Because it hasn’t been tampered with overmuch, it is an excellent booster for any musk compatible perfume.  My favorite mixer with this is Al Rehab’s Full.  It turns a “nice” into a “rrrrrowr.”

Webmatron of ModernTraditional.com
View all posts by Sis. Nicole Lasher →