Long before the first bento box was laquered in Japan, Africans were carrying their lunches to school and work.  The traditions vary from country to country and across ethnic groups.  I haven’t managed to find any specific information on special containers, but here and there I’ve found various things that well, don’t fit much other than a lunch situation.  One of them is the lunch basket.

Some resemble the Indonesian style lunch basket, while others are either bucket or somewhat vase shaped.  Generally, whatever type of basket weaving is common for one’s area, will determine what kind of lunch baskets people carry to school or work.  That is, if they carry a basket at all.  Baskets have lost favor in the age of plastic and metal.

In some cases, lunch is a communal meal.  Students or workers will each bring a dish they specialize in, and it’s all brought together to one meal, which everyone shares.

If you’re just starting out carrying African style lunches though, it’s best to do it as an individual, and then later include others if they’re interested.

To decide what to put in your lunch basket, just decide which regional or cultural cuisine you like best, and select recipes that are portable.  If you’re used to taking a sandwich for lunch, try making one with flatbread or griddle cakes instead of regular sliced bread.  Injera and spicy chicken stew are a good combination from Ethiopia.  Though it’s not technically traditional South African fare, you can fill a hollowed out half baguette with chicken curry.  Be creative with it. 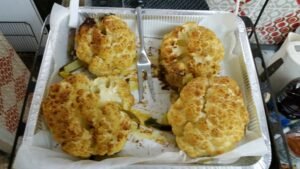 Also, you may want to research the eating etiquitte of various regions.  In most of Africa and the middle east though, folks didn’t traditionally eat with utensils except perhaps a spoon for a thin soup.  It is said that it was considered somewhat rude to bring “weapons” to the table.  So utensils were for cooking and serving, not for the eating of meals. Africans in most areas eat with their right hand, and the left hand is kept away from the table.  If one needs help tearing something, one asks others for help.

When you make things like porridges for your lunch, you may want to keep that in mind.  Make them somewhat stiff and not soupy, so that they can be easily scooped up with the fingers, and dipped in whatever sauce or stew you make to go with them.

So basically your constraints are: